Implantation in the absence of teeth

A toothless jaw or adentia is not uncommon not only among the elderly, but also among young people. You should know that teeth can fall out due to poor care, smoking, injuries. For example, advanced caries can easily go into periodontitis, because of which it begins to stagger and falls out.

At the same time, the lack of a tooth is not a big problem. Thanks to modern implantation methods, we can successfully and quickly overcome this problem. There are several methods with which you can restore the toothless jaw.

So, what can we offer patients with full edentulous teeth?

Of course, a removable prosthesis or fixed design. At iStomatolog, we manufacture complete removable dentures, like temporary dentures, so that the patient does not experience discomfort due to aesthetics. The prosthesis performs its function during the healing period of the main surgical work (two-stage implantation, sinus lift, etc.).

Cons of a removable denture:

It takes many visits to the patient for correction and much more.

That is why we offer various treatment options for toothless jaws with artificial roots - implants. You have a choice, you can get a conditionally removable design or non-removable, we will talk about each method below.

A low-cost prosthetics option implies the use of two implants in the area of ​​missing fangs and a prosthesis for 12-14 teeth, which is attached to special balls (boll abbots).

All-on-two is not fixed because there is a large load on the supporting implants. Conditionally removable design due to the frame allows us to unload supporting implants and transfer part of the load to the mucous membrane of the oral cavity (gums).

the prosthesis is fixed in the oral cavity perfectly

free palate (on the upper jaw)

replacement of matrices at boll abbeys (1 time per year), and this is an additional cost.

A system that allows the design of 12-14 teeth on four implants. In this case, the implants are placed in the area of ​​the missing second and fifth teeth. Such a system can be conditionally removable, as in the previous system, or non-removable (cemented or screwed).

The system (all four) allows you to bypass anatomical formations (without sinus lift and without augmentation of the bone in the lower jaw) and, like the previous one, allows you to make temporary prostheses either on the day of surgery or on the 2-3rd day.

It is difficult to attribute such a prosthetics system to a low-budget one, since with the screwed-on system special implants and a digital template are used, which will allow to bypass the above-mentioned anatomical formations. At the same time, the system has worked well and has been used for over 20 years.

A system that differs from the previous one with two additional supports (implants) in the area of ​​missing 6 or 7 teeth (molars). This allows you to redistribute the load between the abutments and thereby extend the use of fixed structures for a longer period.

In the same way as with the previous technology, the teeth are installed either at the same time on the day of implant placement, or, with a two-stage technique, they are delayed.

Other systems, such as All-one-eight, etc. implies the replacement of lost teeth with implants in a ratio of one to one. But, we are not supporters of such techniques because we do not see the point of installing 16 implants in the absence of 16 teeth on the jaw, since it is expensive and does not make any sense from the point of view of functionality. The load on bone tissue with such an extensive intervention will be too great.

Myths and reality in dental implants

Perhaps every day you hear on the radio an advertisement: “dental implantation without surgery or laser implantation of teeth without incisions” What is true and what is false?

Firstly, in medicine, any intervention in the human body, whether it is tooth extraction or tooth implantation, is an operation.

Secondly, during implantation of the teeth, a gingival incision and detachment to the jaw bone are made so that the bed can be drilled under the implant. Another thing is what kind of incision and what exfoliation.

We use a minimum incision of up to 5 mm without exfoliation of the mucosa, which allows us to get minimal trauma, quick healing and recovery.

In the absence of teeth, we do not use a scalpel to cut the gums, but use mukotom (a tool for piercing the gums) and a pilot drill through a template specially made by digital method for installing implants. That allows us to accurately position the implants in the bone, bypassing the anatomical structures. And no matter how we would like, but all these manipulations are surgical intervention, that is, an operation.

Also, for quick healing of the gums after implantation, we use A-PRF (platelet-rich fibrin). For the convenience and tranquility of the patient, implantation can be performed under sedation (medical sleep), when the patient does not see what is happening in his mouth and wakes up when the doctor has already finished everything.

The cost of work in the complete absence of teeth depends on which implant system we choose, the implant of which manufacturer we choose, what type of prosthetics: removable, conditionally removable, cemented or screwed on. All this is considered individually with the patient, based on the clinical picture in the oral cavity and computed tomography.

With us you can get a free consultation with the calculation of options for the cost of work. Do not forget that with the current development of dentistry, there is practically nothing impossible and you should not be upset due to the loss of teeth. Take time to come to us, and iStomatolog will do the rest. 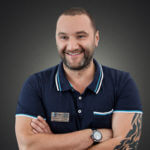